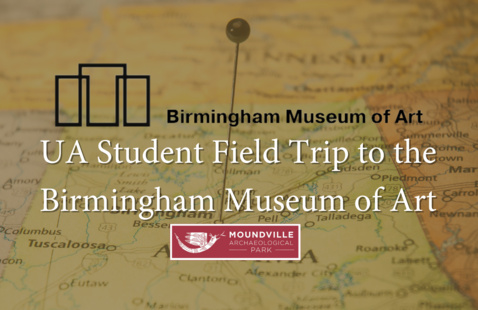 On November 23rd at 9:00 AM, University of Alabama Students are invited to go on a field trip to the Birmingham Museum of Art to see the Lost Realms of the Moundbuilders: Ancient Native Americans of the South and Midwest exhibit!

UA Students are requested to sign-up for a free tour and asked to meet at Smith Hall.

More than 1000 years ago, Alabama was home to the Mississippian civilization, one of the largest and most important Native American cultures ever to exist. This ancient civilization, also known as the Moundbuilders, created an empire comparable to that of the Aztec, Mayan and Incan cultures. The Mississipian Moundbuilders were responsible for some of the first ever man-made monuments in North America, massive platform mounds constructed by hand. Beyond this earthen architecture, the Mississippian Moundbuilders also produced remarkable works of art and material culture including intricate jewelry, detailed pottery and sculpture, sophisticated weapons, and more.

Lost Realms of the Moundbuilders: Ancient Native Americans of the South and Midwest, explores the fascinating archaeology and history of the Mississippian Moundbuilders, their religious and ceremonial activities, farming and hunting practices, trade networks, and their highly-developed social, political and religious centers. The exhibition highlights the relationships between the historic ceremonial sites and other contemporaneous Indigenous communities in North and Central America, and illustrates how ecological factors, specifically the occurrence of the “Little Ice Age” beginning in 1350 AD and lasting until 1650 AD may have led to the decline and ultimate abandonment of Moundbuilder sites.

Organized by the National Cowboy & Western Heritage Museum in Oklahoma, the exhibition features 175 historic objects from four major Mississippian Moundbuilder sites: The Spiro Mounds in Oklahoma, Moundville in Alabama, Etowah Mounds in Georgia, and Cahokia Mounds in East Saint Louis, Illinois. The exhibition also showcases contemporary Indigenous works of art that connect the art and artistry of the Mississippian Moundbuilder peoples to their modern descendants.

Lost Realms of the Moundbuilders: Ancient Native Americans of the South and Midwest (originally titled Spiro and the Art of the Mississippian World) is organized by the National Cowboy & Western Heritage Museum.