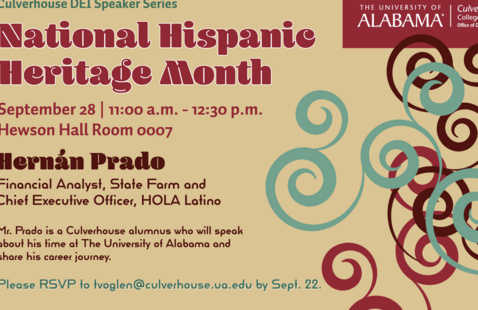 CEO of HOLA Latino, Hernan Prado will speak to students on September 28th, at 11 am in Hewson Hall 0007.

Hernán Prado moved to Alabama from Ecuador in 1995. He worked for seven years at the University of Alabama Program for Rural Services and Research as the Hispanic Programs Coordinator. He developed the PACERS ESL Program at Collinsville High School and coordinated the formation of the Collinsville Hispanic Health and Education Corporation, the first Hispanic non-profit organization in Alabama. Mr. Prado coordinated the creation and funded the Alabama Latin American Association (ALAS) and is currently its executive director. Also, he was the grantee and principal investigator for Project Mi Futuro, an educational approach to encourage Hispanic adolescents to graduate from High School and attend College funded by NASA.

During that time, Hernán coordinated the creation of several statewide Hispanic Coalitions along with several governmental agencies, he also developed several health, education, and social programs.

In 2003, Hernán joined a small business and developed KPI Latino, the first Hispanic/Latino marketing company in Alabama. Years later, he started his own business as the Chief Executive Officer at HOLA Latino, a company that assists public and private agencies to design, produce, and distribute strategies to market, inform, and educate the new Hispanic immigrant community. He started the first education radio show in Spanish called Hola Alabama! on June 16, 2002, and the first bilingual TV show called Hola Amigos! on November 17, 2002.

Hernán served on the boards of the Birmingham Business Alliance (BBA), as the co-chair of the Birmingham Regional Enterprise Council (BREC), and as the vice-chair/chair-elect of the Hispanic Business Council (HBC). He also served on the boards of the Civil Rights Institute, and the Ronald McDonald House of Charities. Hernán was also part of the first board of the Hispanic Interest Coalition of Alabama (HICA), and several other non-profit organizations. He received the National Association of Social Workers (NASW) Birmingham Unit “Public Citizen of the Year” Award and the Alabama Chapter NASW “Public Citizen of the Year” Award in 2003.

Hernán believes that the American Dream is achieved through sacrifice, risk-taking, and hard work, not by chance. He was able to accomplish his dream, and now he wants to share what he knows with his community.